Skip to primary content
(Also posted on the blog portion of Diane Sward Rapaport’s website (www.homesweetjerome.net) www. homesweetjerome.net) Only a few of the blogs here are part of my new book; and new ones will continue to be posted.)
Barbara Mauritz of the 60’s and 70’s band Lamb died on April 14, 2014 in San Francisco, California. She was 65 years old. (The cause of death is unknown and is being investigated by the S.F. Coroner’s Office.)

The band was managed by Bill Graham’s Fillmore Management. Four Lamb recordings were released by Columbia Records: A Sign of Change, Cross Between, Bring Out the Sun, and Music Box. (Walter Rapaport, sound man, producer, and “shepherd” for Lamb has some pristine copies of Cross Between for sale; and is thinking of putting out a remix of some of Lamb’s songs. If interested, email Wrapaport@centurytel.net)

BarbaraMauritz and Bob Swanson of Lamb. Photo by Peter Olwyer.

Her song, “Hello Friends,” opens the recording and DVD of The Last Days of the Fillmore, a grand beginning to the opus that was Fillmore West. Her joyous song, “River Boulevard’ is on there as well, which was eventually recorded by the Pointer Sisters.

From 1969-1974, I was the artist manager hired by Bill Graham to administer Lamb’s business for Fillmore Management. Of all the musicians that I managed during my career there including the Pointer Aisters), Barbara Mauritz and Bob Swanson of Lamb most captivated my heart. Barbara’s eclectic, full-range voice wove in an out of Bob’s classic/jazz guitar riffs like an ornate tapestry, full of magic and surprise. Her lyrics were filled with odd metaphors and imagery.

“If silver fishes grew on trees

and the skies were filled will oceans

Where or where could I find my love

If I ever had the notion.” 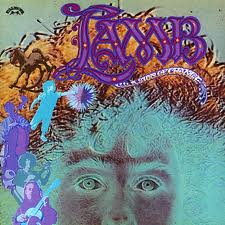 Their music still haunts me and comes into to me at odd times, quite unbidden.

As Barbara often said, she was a medium: the songs would come to her from some remote areas of the galaxy and she would write them down.

Before she died, she was working with engineer Fred Catero on mixing and releasing some of the songs recorded but not released on other albums and songs recorded in later years with producers Al Brown and David Litwin.

Mauritz was a prime example that you could have enormous talent and charisma, and the push of someone famous like Bill Graham, and still fail. She was a victim of misfortunate circumstances and bad luck.  She broke most everyone’s heart that ever worked with her.  Her music haunts us to this day.

Lamb never earned any royalties for her recordings, the record companies claiming that the band ‘owed’ them for recording expenses never recouped by sales. Barbara Mauritz was not paid for songwriting royalties for the Pointer Sisters’ recording of River Boulevard—the producer pocketed the money. By the time Barbara thought to sue, she had no money to do so and the record company had sold twice. She received no royalties for re-releases of her albums last year by Sony, who claimed they would be happy to pay her if she could only produce the original record company agreement. And so it always went.

Barbara is survived by her sister Jackie Mauritz Schoen of Medford, Oregon and two other sisters, their whereabouts unknown. She is mourned by her old friends­–Bob Swanson, who gave up the guitar for a camera when Lamb fell apart; Walter Rapaport, Lamb’s sound man and producer of Cross Between and shepherd on the first album, myself, four-time engineer Fred Catero, who still lives in the Bay Area, photographer, Robert Altman and San Francisco producer, David Litwin.

Photos of Barbara Mauritz and Altman’s photography book The Sixties, is found on www.Altmanphoto.com